I HAVE A NEW START

My dysfunctional childhood started when I was about six or seven years old. We lived in a nice middle-class apartment home where my brother and I would split a beer with our dad. As we got older, we would sneak alcohol from the glasses of the adults that would come to the parties that my parents had at our home. Our sister would help us have our parties with the kids that came with their parents to these parties. I’ll never forget that smell of the smoke coming from that red plastic cup. When I saw how it made them act, I had to try it. I would sneak and watch them so I could figure out how to use them properly. After I would watch and listened to how it was done, I would sneak and practice without the smoke. Then, one day, a fight broke out just after my father had lit it up. I quickly grabbed the container and noticed it said “Power Hitter” on the side. I squeezed the cup, breathed in, held my breath, and released, just like I had seen the grown-ups do. I put it down and sat on my bed, not sure if I had done it properly. After a minute, my brother asked me what I was doing and that’s when it hit me. For the next ten to twenty minutes, I couldn’t stop laughing! I loved it… that feeling was, at the time, the greatest feeling I had ever felt in my entire life.

When my mother and father got divorced, we moved from our middle-class apartment home to the projects, or what I call the “Devil’s Den”. I was surrounded by single mothers living in debt and bad relationships and hopeless kids addicted to using and dealing drugs with no father figure in their lives. The children were meaner and faster and bigger than me. I was a little excited about this new life, but mostly I was scared.

By thirteen years old, I was rolling joints, having sex, fighting, and drinking. Pretty soon, money started to become tight at home. Child support stopped, bills started to get behind and I would notice my mother crying in bed at night. When I asked her what was wrong she would tell me that even though she worked 48 to 50 hours a week it still wasn’t enough to provide for the family. My brother and I would eat cheese and cereal regularly and the clothes we wore had to be shared since we are only one year apart. So, to help out, I started selling candy and joints at school. My uncle would give me some weed with the promise to pay him for it later and my grandmother gave us candy from Tom’s candy shop. They sold like hotcakes! Sooner than later, my brother and I were pulling in 60 to 100 dollars every week! As I continued in school, I learned in math class about expenses, profit, and supply and demand and applied what I learned to the business we were running. Everything was going great! We were dressing the part too. We would go to school in the clothes mom bought us from K-Mart, and then change into the clothes we bought from the mall once we got to school. At this point, life was fun for me and my brother. Things took a turn, however, when we were noticed by a big drug dealer that started liking my sister. He said he liked the way we carried ourselves, how well we ran our business, and could tell we knew what we were doing by the way we dressed. One day, he poured some white sugar-like substance on the table, rolled a twenty dollar bill, stuck it up his nose, and sniffed. Then he handed me the bill. He got angry when I accidentally wasted what was on the table, but after realizing it was my first time, he calmed down and instructed me on how to do it properly. Once I got it right, a light bulb lit up in my mind: I could put this stuff in the joints I’m selling at school and triple my profit! My brother and I talked the idea over and started selling the laced joints that month.

The outcome was as expected, pulling in just over $400 at the month’s end. My sister’s admirer was shocked that we had made such a profit from just selling candy and laced joints and that if we talked to our sister for him, he would hook us up with more products. That was an offer we couldn’t refuse, and he made good on his promise. He warned me not to use the product too often but before I graduated high school I was a full-blown addict, thirty pounds lighter than when I started the year with no new clothes, no new clients, and a broken relationship with my brother. In fact, it hurt my brother so badly that he and I ended up fighting. We fought not because we lost clients but because he lost his brother to cocaine. He watched the light dissipate from my eyes and my soul.

The day I realized I needed help, I was standing in the middle of the street looking for a way to get high. It was night and very dark and I thought to myself, “this is madness!”. At that moment, I started to cry, and I asked God to help me. Immediately the street light above me got brighter than normal like it was shining only on me. I knew God had heard my prayer, and the next day I called the Rescue Mission of Middle Georgia and told them I was ready for a change.

Since being at the Mission, I have realized that my whole life has been spent looking for security, peace of mind, and happiness in outward appearances, drugs, sex, and drinking. My parents getting divorced and moving to the projects had a big impact on me, and I used drugs and alcohol to get by and fit in. I have learned to think before I act, slow down and view the whole picture and release control to Jesus. I now view my failures and shortcomings as something God used to bring me back into a relationship with my family. Now, because of the change in my life, I can do the things I’m passionate about like living life, helping people, driving, and shopping. I no longer need to hide my shame and guilt with worldly external things because Christ has set me free! I am so excited to see what God has for me as I begin my new life in Him. I graduated from the Men’s Life Recovery Program on January 6, 2022, and I humbly ask that you pray for me as I begin my new journey.

“Be strong and courageous. Do not be afraid; do not be discouraged, for the Lord your God will be with you wherever you go.” – Joshua 1:9 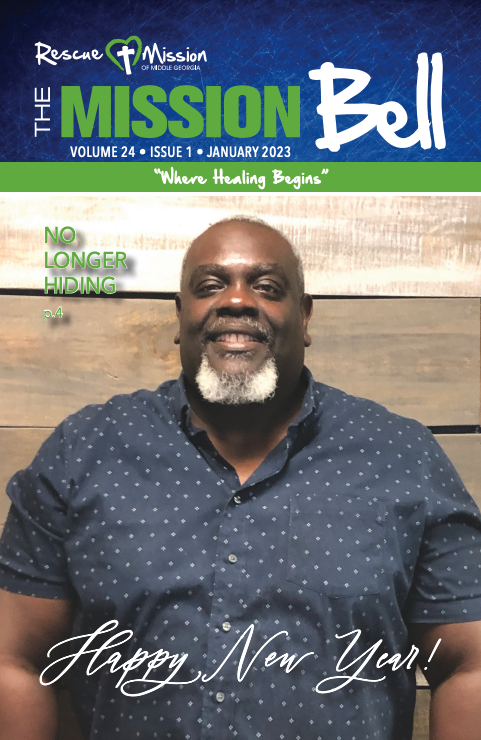 Give now to help men, women, and children overcome addiction and other life-challenging issues – and find new life through Christ’s love.